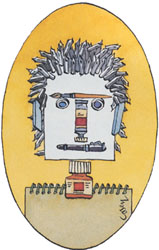 On 14 June 1950, Bernard Cosendai – the later Cosey – is born in Lausanne, Switzerland. He is the youngest of three children and the only boy. As a boy, he loves to read comics – among the most loved are the books by Tillieux, Franquin, Macherot, Jijé, Disney, and Hugo Pratt. He quits school quite early, to start working in an advertising agency as a graphic designer.

In 1969, Cosey reads a newspaper article about Derib (Claude de Ribeaupierre) – the only professional comics artist in Switzerland at the time, most known from his Yakari and Buddy Longway series. They meet and Derib decides to take Cosey as an apprentice. Cosey will work with Derib for several years, especially as a colourist for ‘Go West!’ and ‘Yakari’. Cosey and Derib share their interest in oriental philosophy, and a lifelong friendship results from their cooperation.

Also in 1969, Cosey has his first publication: he wins the third prize with a cover design for Spirou magazine.

In 1971, Cosey publishes his first comic. Three stories of ‘Monfreyd et Tilbury’, with scenarios by André Paul Duchâteau, are published in the belgian newspaper ‘Le Soir’. These are followed by his first stories as a complete author with the comics about the journalist Paul Aroid, that appear in the swiss newspaper ’24 heures’. With a scenario by Jaques Ralf, Cosey makes ‘Un shampooing pour la couronne’ – his last album in cooperation with a scenarist. Again for the newspaper ’24 heures’, he makes a comic about a certain Saphorin Ledoux: a character that can – at least in appearance – be seen as a proto-Jonathan.

1975 is the year of a great breakthrough: Cosey gets his first Jonathan story published in the magazine Tintin. It is an innovating, original story with a main character that is not a hero, nor an anti-hero, but a very human, amnesiac figure. A story not based on action, but a poetical, human, ‘slow’ story, set in the high mountains of Tibet. A daring page layout, a very typical colour palette of purples, blues and orange-browns. Originally conceived as a ‘one-shot’ story, Cosey has started on a long series. Immediately, his talent is appreciated in the comics world and he is awarded the ‘Prix Saint Michel des Espoirs’ in 1976.

Documentation about Tibet is very scarce at that time and Cosey decides to go to Tibet as soon as it is allowed by the Chinese government. He is inspired by the people he meets and the life he sees around him, and in his next albums he enjoys showing ordinary daily life. Soon, he makes it some kind of recipe: travel to collect documentation, develop stories in the places he has visited afterwards, when he is back home and experiencing a certain nostalgia. His albums show traffic signs, food packages, local transportations, billboards, etcetera: documentation that can not be found in travel agency brochures, giving his albums an extra layer of poetry.

In 1982, he wins the Alfred for ‘Best album’ in Angoulême, for his seventh Jonathan album, Kate.

After nine Jonathan albums, Cosey wants to break free and do something new, and in 1983-1984 he makes ‘À la recherche de Peter Pan’, a graphic novel well before that denomination was invented. A legendary album (originally published in two volumes), with a nearly white cover that has become iconic.

It is followed by two a-typical Jonathan albums, set in America – the last Jonathan albums to appear for a great while. Cosey makes several one-shot albums for Dupuis, starting the famous ‘Aire Libre’ collection with the beautiful ‘Le voyage en Italie’. A few years later he makes the audacious ‘Saigon – Hanoi’ – a story that his publisher considers ‘impossible to sell’, but it wins the prize for best scenario in Angoulême.

In 1997, Cosey returns to Jonathan, with ‘Celui qui mène les fleuves à la mer’, and after another album in 2001 he leaves Jonathan again for a while. After seven years, in which ‘Le Bouddha d’Azur’ stands out as a high point, he returns to Jonathan with three albums in a row. In 2016, a childhood dream comes true when he is invited to make a Mickey Mouse album.

Appreciation and recognition for his talents and accomplishments increase while Cosey builds his oeuvre: from 1999 onwards, there are several great expositions of his work, in the ‘Musée de la Bande Dessinée’ in Angoulême, in Charleroi in 2006, in Lausanne in 2007. Next to this, there are many smaller expositions, at Galerie Champaka (Brussels), Raspoutine (Lausanne), Daniel Maghen (Paris) and others. The album ‘Echo’ (2007) is an exposition on paper, a great art book. The Jonathan albums are published in a series of ‘Intégrales’. In 2013, he is awarded the most important prize for comic artists in Belgium , the ‘Prix Diagonale – Le Soir’. And finally, in 2017, he is crowned with the prize of prizes, the Grand Prix du Festival d’Angoulême.