I recently discovered polish editions of the first two Jonathan Intégrales, published by Wydawnictwo Ongrys. The albums were translated by Daniel Pánski.

There is an interesting story behind these polish Jonathans. In 2020, publisher Ongrys asked readers which comics they would like to read in polish. Jonathan ended on de sixth position in the ranking, but was one of the first series to be translated. One of the reasons behind this decision was that the Intégrale albums were available, so the polish publisher could start with a decent body of work.

In June 2021, the first album was published, the second album in December 2022. I hope the sales figures will meet the expectations of the publisher. 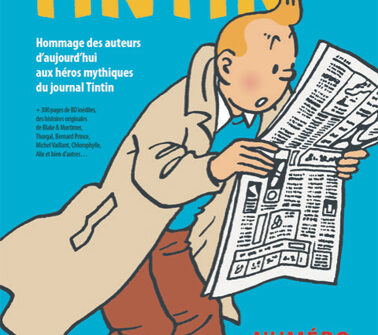 During the Comics Festival in Angoulême, Lombard announced a one time comeback of the ‘Journal Tintin’. The unique issue will be in shops in September 2023. The publication marks the 77th birthday of the ‘Éditions du Lombard’ – a figure that refers to the legendary subtitle of the magazine.

In the magazine, we will read 50 short stories, written by new comic artists and some of the classic artists, like Hermann, Turk, Dany and… Cosey.

From what I understand from an article in Le Figaro (by Olivier Delcroix), Cosey will make a short Jonathan story. Interesting! 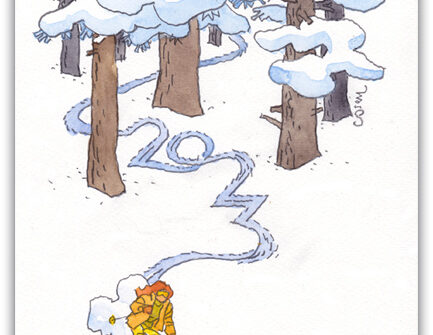 Recently, Cross Cult published a new german edition of ‘Auf der Suche nach Peter Pan’. The book has a new translation and a new layout for the cover.

One of my dear correspondents sent me some great materials from the Cartoonmuseum Basel. Above, you see a promotional folder for the exposition ‘Cosey – vers l’inconnu’.

The Cartoonmuseum also organises a contest. On the frontside (shown above) you can draw your own destination, on the backside there are a few (not so hard) questions. You can win prizes, but I don’t know what, and I don’t know the conditions for participations.

A set of postcards that is for sale at the museum. I wonder how many different ‘À la recherche de Peter Pan’ postcards there are…

I received some pictures of the vernissage of ‘Cosey – Vers l’inconnu’ in the Cartoonmuseum Basel.

Cosey visiting his own exposition. I have seen several expositions of works of Cosey, but I think the one in Basel is very special due to the murals and decorations.

A big crowd visiting the vernissage in Basel on Friday, November 11th.

Musical intermezzos by Swiss musician Sara Oswald. Sounds and music that go wonderfully with the works of Cosey.

Thanks to Anne Ruff of the Cartoonmuseum Basel 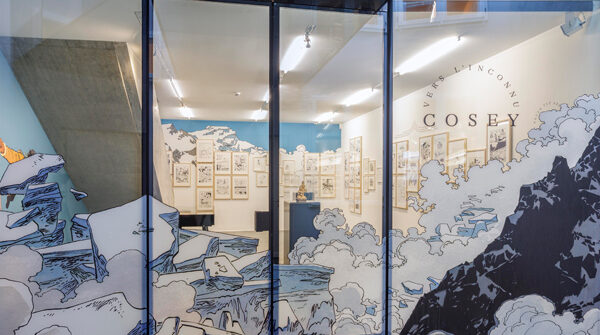 Plenty of original drawings to see in Basel, as you can see on this picture. You can also admire some Tibetan statues.

The Cartoonmuseum has made several murals, so you are immersed in the world of Cosey. I read somewhere that the museum has been closed for two weeks to get it ready for the exposition.

A space dedicated to the Mickey and Minnie albums. All in all, the exposition looks great – I wished Basel was a little bit closer to my home. Maybe it is time for a first exposition of Cosey works in the Netherlands…

Thanks to Anne Ruff of the Cartoonmuseum Basel 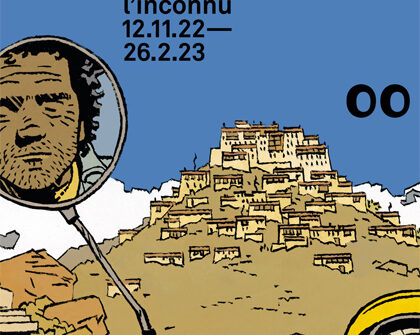 From 12 November till 26 February 2023, you can visit the Cosey exposition in the Cartoonmuseum in Basel (Switzerland). Title: ‘Cosey vers l’inconnu’ (Cosey to the unknown) – strange enough, they have chosen a french title for the first Cosey exposition in a german speaking environment.

What can we expect to see: original drawings, among which pages of the latest Jonathan, photos, sketchbooks, films and religious objects from Tibet.

On 11 November, at 18.30, we can all visit the vernissage of the exposition – an evening with lectures and music. Cosey will be present.

This month, my website ‘The World of Cosey’ celebrates its 20th birthday! In september 2002, I had some vacation days left when I changed jobs. I decided to spend the time realising an idea I had for some time: a web site dedicated to the works of Cosey. I suspected that Cosey himself wouldn’t start an adventure in the virtual universe (I was right about that), and I felt he deserved a presence on the worldwide web.

And that was how it started…

Over the years, many Cosey fans have sent me messages, e-mails, chats but also ‘real post’: news about Cosey, posters or publications that were missing from the ‘Other Works’ section of my site, wine labels, lottery tickets (no prizes won), links to interviews on tv, radio or newspapers, etc. With some of them, I have had wonderful conversations by mail about many aspects of Cosey’s work. I want to mention and thank some of them here – my apologies to anyone else who has mailed me – Bernard Matthey-Doret, Dinu Logoz, Philippe Regottaz, Ralph Doumit, Jean Christophe Defline and Thomas Geertz. Thank you all!

It has been an incredible experience to receive messages about Cosey from parts of the world where it must be very hard to get your hands on albums by Cosey. I wonder if these fans can actually read the albums – as far as I know there are very few english translations, let alone Bengali or Japanese. It must be these formidable drawings of Cosey that speak to everyone.

The amount of visitors to ‘The World of Cosey’ is astounding, I find. I have sound statistics on my site since 2016 and since then, my site was visited almost 90 thousand times. In years with a new album (like 2021), I have on average 52 visits every day, in years without new albums (like 2020 or this year), still 33 visits are made to my site every day, on average. Highest daily scores were reached in January and February 2017, when Cosey received the Grand Prix in Angoulême.

Finally… Cosey himself. Very soon after publication of ‘The World of Cosey’, he contacted me about my site. He was very kind and positive about it, and he immediately authorised any use of his artworks on the website. Although Cosey writes about a ‘participation quasi inexistant’, we cooperated in making ‘virtual expositions’ and interviews in the weeks up to publications of albums, from 2008 onwards. I have learned that I must never ask him if he is working on a new project – everything is secret until the publisher announces a new album.

I met Cosey only once, in Angoulême in 2018. We walked from his hotel to the exposition ‘Une quête de l’épure’ and talked about the expo and about Calypso, which had been published a few months before… but Cosey preferred to talk about my water colour drawings, as he does in the text he wrote to celebrate this 20th birthday of ‘The World of Cosey’.

Modest about his own phenomenal achievements, generous towards others, that is typical of Cosey. I hope I can maintain this website for many years to come and – although I grant Cosey all the free time and rest he wants – that I can add many novelties to the site.

Thanks to all contributors, to Cosey and to all visitors!

If you want to see my water colour drawings, please visit the Sketchbook-page of my website. 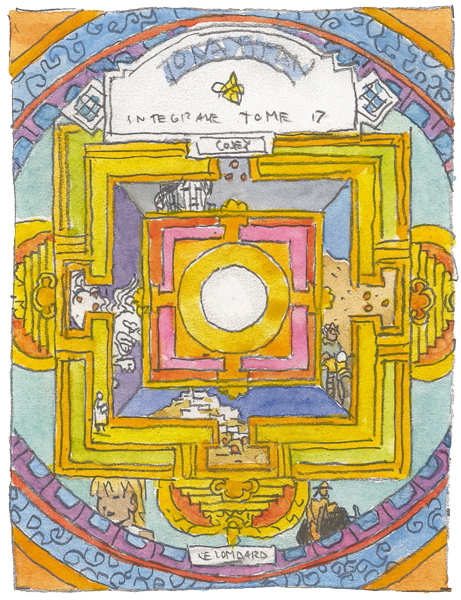 The ‘Jonathan Intégrale – tome 17’ will contain only one episode of the Jonathan series, the finale volume 17 – La Piste de Yéshé. A dossier of some 40 pages will precede the Jonathan story.

The dossier is written by Nelly Rieuf Bista, a french woman who has been living in the Himalayas since she was 23 years old. She worked on art projects in Mustang (Nepal) and Ladakh (India), founding the Matho Monastery Museum. Among others, she works with teams of restauration artists to preserve mandalas and wall paintings – as you can see on the photo above. Not only has she been working on art projects: she also worked on a drink water system that works at the low temperatures in the high mountains.

Title of the dossier is ‘Vivre sur le toit du monde’ (‘Living on the roof of the world’).

Thankas and mandalas were an inspiration for Cosey while working on Jonathan 17, where we see Jonathan assisting a thanka painter. It also was a inspiration for the magnificent cover of the Intégrale.

The dossier will be illustrated by photos taken by Cosey, and… of course, by many drawings – most of them preparatory sketches for Jonathan 17. Among them, we will see some cover designs for the album.

All pictures in this ‘news message’ are taken from the dossier of the ‘Jonathan Intégrale – tome 17’. Photos and drawings are made by Cosey. 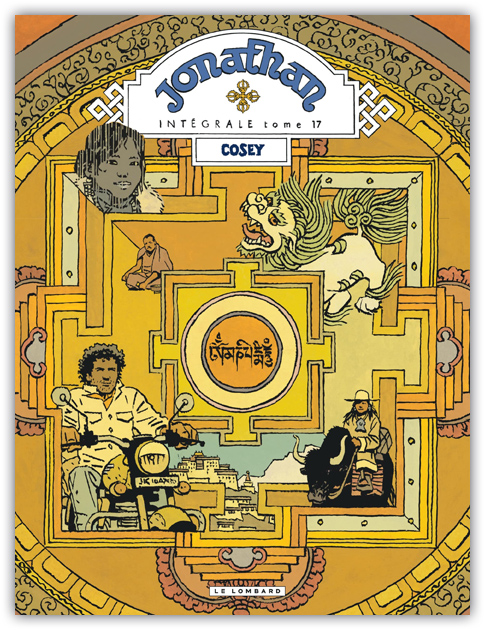 A new volume of the Jonathan Intégrale has been announced for November 4th.

The album will contain the last Jonathan story (‘La Piste de Yéshé’), and more… it will have 104 pages. Above, you can see the marvellous cover. 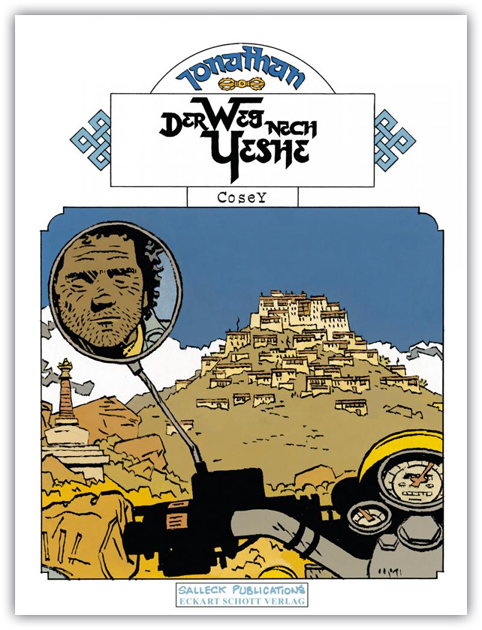 Salleck Publications/Eckart Schott Verlag announces the release of the german edition of Jonathan 17 – De Weg nach Yeshe for the second half of 2022. A release date has not yet been confirmed.

As far as I know, this is only the second translation of the 17th Jonathan album, after the dutch version.

In the June/August issue of the magazine ‘Tintin, c’est l’aventure’ (no. 12), we can read an article about Cosey. The articel consists of an interview with Cosey and a fold-out page with drawings from ‘À l’heure où les dieux dorment encore’.

The magazine itself is dedicated to travels and most articles have a link to Tintin. In the interview by Frédéric Granier, Cosey tells about major differences between his working method and that of Hergé. But also of some of the similarities: even if Hergé’s and Cosey’s drawings are very different, both of the artists strive to great simplicity and readability.

It is a short interview, but interesting. The magazine (halfway between magazine and book) itself is beautiful and worth its price, I would say. 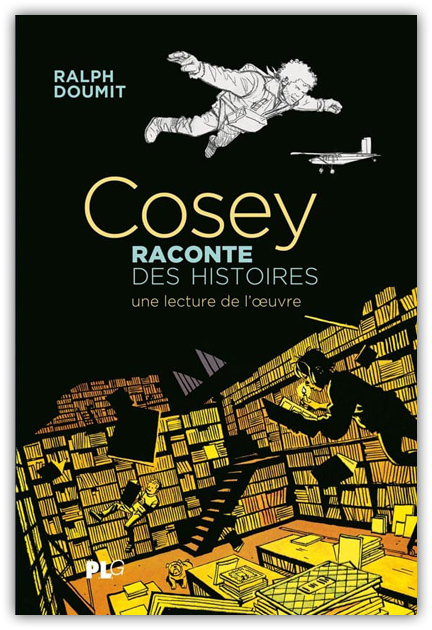 I finished reading ‘Cosey raconte des histoires’, written by Ralph Doumit and published by PLG. I have written a full review of the book here, but I can give you my conclusion here: it is an excellent book. Ralph succeeds in bringing to light some themes and characteristics of Cosey’s work that give insight in the peculiarities of Cosey storytelling.

Please read my review and go to your favourite bookstore!

Since last Friday, the book ‘Cosey raconte des histoires’, by Ralph Doumit, is available in your bookstore. The book is published by PLG in its collection ‘Mémoire Vive’.

Ralph call the book a ‘hommage’ to the stories Cosey has made. the book has a biographical part, Ralph’s personal lecture of Cosey’s albums and his notes going with some typical Cosey pages. The book also contains interviews or notes with or by Gilles Ciment, Jean-Pierre Grandjean and Jean-Luc Cornette.