‘In fact, I am a colourist, but since you cannot earn a living by colouring, I also make scenarios and drawings!’ says Cosey.

‘In the area of colours I really feel at ease and I have the impression I can express myself without too much effort, without torturing myself, because I know how to do it. […] While I have to suffer for the drawing and the scenario!’

Nevertheless, colouring is the only part of his work Cosey has left to others.

In 1969, Cosey himself starts his career in comics by colouring the comics of Derib, at the age of 17. For the ninth Jonathan album (Neal et Sylvester), Cosey works with the colourist Fraymond, whom he knew from the work done for Hermann.

‘It was difficult for me to step out of my colour palette, just because I felt so at ease with it. I think it is interesting to have a colourist from outside, because he will add  a new dimension to your work, without betraying it, as would be the case with a drawing assistant.’

The cooperation with a colourist was continued in the next two Jonathans, when Paûle Ceppi was Cosey’s colourist. Cosey: ‘Poor Paûle, she has suffered! One does not lure her into this trap again!’

The influence of the colourists on Cosey’s later work can not be underestimated.

The first Jonathans are characterised by somewhat dark, gloomy colours. Blues and orange-browns are the dominant colours. Also for ‘A la recherche de Peter Pan’, this same palette is used, but at the end of part two, the colors become brighter.

With ‘Le voyage en Italie’, Cosey’s colours become still brighter and more saturated, and there is a wider variety of hues. From this album onwards, the colours become more and more vivid. 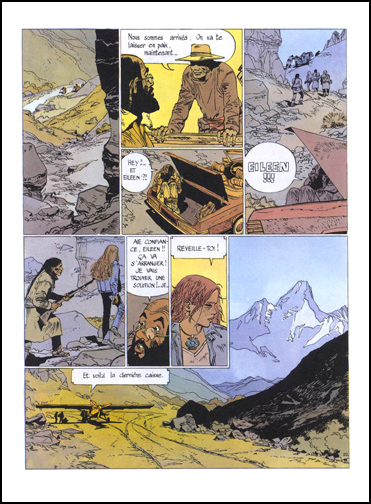 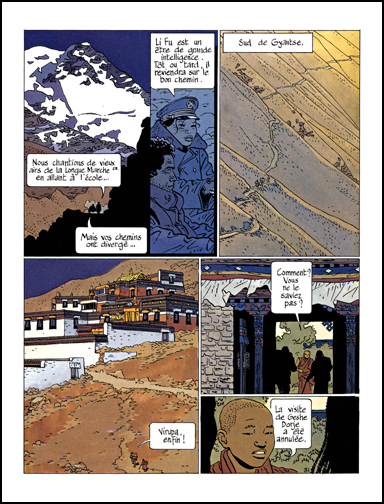 A third colourist with whom Cosey will work is Valott, who colours the re-edition of ‘Le retour de la Bête’ and ‘Zélie Nord-Sud’.

Since a few years, ‘direct colouring’ is quite common among European comics authors. This is the direct application of colours on the original drawing. Cosey: ‘For a comic with more images on one page, it is a technical restriction, it demands such care, such tidiness! It would make me horribly nervous!’

‘Once I make the final black trace, or even still in the pencil stage, I have fought with the paper so much that it isn’t possible to put colours on it.’

‘And moreover, one of the characteristics of comics is this black trace, which is pure and is very readable. […] I love this typical comics look.’