In almost every interview with Cosey you can find, two questions are coming back. The one is ‘When will Kate reappear?’, the other is ‘Is Jonathan you? Are you Jonathan?’. The main reason for this is, of course, the similarity between Jonathan and Cosey.

For readers who confuse Jonathan and Cosey, Cosey has the following answer: ‘I am the shadow of Jonathan, his darker, less brilliant side. But there is a relation between the shadow and the character.’ The continuous confusion of author and character was one of the reasons for the eleven years break between ‘Neal and Sylvester’ and ‘Celui qui mène…’. 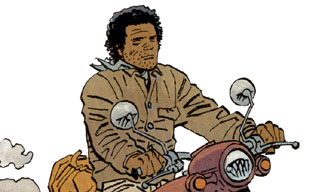 Jonathan was meant to be a character for a one shot, but after the first album, Cosey still wanted to tell more about him: a series was born. But still, Cosey has his problems with the phenomenon ‘series’: ‘I find it very restrictive to re-take characters. It is very difficult to make them live. They immediately become puppets, lifeless dolls with schemes in their heads, robots who cannot do this or say that because in a previous album…etc.’

‘With Jonathan, I am between two worlds. He has all the characteristics of a one shot character, in the sense that he is fairly human, rather than heroic or anti-heroic. Jonathan is more a character for a novel, which is to say that he cannot, theoretically live for fifty albums. So, within this character there is a contradiction because he is the main character of a series. I try to sidestep this contradiction, but it appears continuously. I have not found the solution.’

In 1974, Cosey makes ‘Saphorin Ledoux’, a comic story for the Lausanne newspaper ’24 heures’. The major part of the story is set in Tahiti (the story is also published by ‘La Dépêche de Tahiti’). The story has never been published in an album and it is almost impossible to find.

Therefore, it is unknown to most Cosey readers that this Saphorin Ledoux is a proto-Jonathan, borrowing his looks from Cosey himself.