‘… it may seem ambitious or proud to say so, but I always try to make ‘the album of the century’.’

‘And then, when I finish it two years later, I realise that I have missed it. I don’t say it is a bad work, but it is not really the work of the century. I draw the word ‘End’ and tell myself, seriously, that that will be for the next album.’

In first instance, there are ideas. Ideas that come up any time, any place: ‘The first stage, which is a continuous one, is making notes in a notebook. It takes place at any time. While I am working on the thirteenth album, I take notes that may be used in the twentieth album.’

‘In fact I write down ideas for scenes, dialogues between characters, elements that I like to tell about. But without knowing what it will give.’

‘When I write a new scenario, I browse through my idea notebooks, and I write down in another notebook the ones that please me. When I have gone through all my notes, I put every idea of the second notebook, one by one, on Post-Its.’ If I see a possible order, a thread, I put my Post-Its in this order, with enough space between them, because there may only be ten of them yet.’

Little by little, Cosey moves, adds and deletes Post-Its and the notes become to get some organisation, they become a coherent whole.

‘Well, I have organised my little notes. Then, I write a summary and I write a more elaborated version. At some point in time, I am satisfied with my text which I call a scenario only then.’ 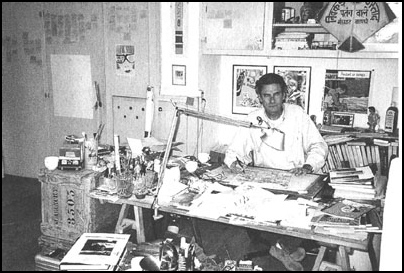 On the photo: Cosey at work. See the Post-It notes at the top left of the picture.

Cosey has organised his ideas and has made a scenario that pleases him. ‘At this moment, in general, I take a break and start a graphical research into characters and certain details.’

And Cosey starts collecting the right documentation. The time spent has given him opportunity to let the story mature in his head and he begins to write a scenario that can be presented to his publisher.

‘I write with the publisher in my head, because it obliges me to write a readable and correct French text. […] The fact that I have to write a proper scenario, reveals some weak spots. I realise I have to rework some scenes.’

Then starts the work that Hergé has called ‘ a surgeon’s work’: the partitioning of the story into pages, into separate scenes.

Cosey: ‘I pre-partition the story and number the sections that will make up one page. This is to estimate which written phrases require a half, or two or five pages, or just a single image. At the end of this pre-partitioning, I know approximately the number of pages of my album.’

Then, the real partitioning (the lovely French word for it: découpage) starts. Cosey returns to page 1, starting all over again: ‘Back to start: my page 1, which are still only a few phrases. I try to determine the exact number of images I need to tell this page 1. At this stage, I make plenty of little rapid sketches. It is here that the number of images, and which images, is determined.’

‘It is a kind of lay-out or ‘mise-en-scène’, but I won’t go any further than the sequence in question.’ Cosey first completes the whole sequence until the final drawings, before he continues to the next scene.

So, Cosey has a scenario indicating approximately which scenes have to be in which page. Then, he starts at page 1, and starts to elaborate the first sequence until it is completely finished, before attacking the next sequence.

‘Making the final partitioning with my drawings sequence by sequence, leaves me an opening, it could still evolve. If it couldn’t, it is fixed, it doesn’t move anymore, I would be bored.’

‘I have this thread to the end, I know how the story will end, but I leave myself the possibility to change anything that can be changed, along the way.’

Cosey allows himself a maximal flexibility to change scenes until the album is finished. ‘It happens that I have to redraw an entire page. It has happened to me with ‘L’espace bleu entre les nuages’. There were scenes that had to be changed. I don’t remember exactly which, but I remember pages that I had to abandon. Not necessarily an entire page, but there are from time to time ‘collages’ and re-partitioning in one page.’

‘But it is also a problem in the scenario when an unforeseen modification disturbs it and I have to go back to a detail on an already finished page.’

‘But I like to work this way, it is my little kitchen.’

Cosey makes his drawing sequence by sequence, page by page. He makes a composition of the pages (1.5 times as big as the album), and then draws each image on a separate sheet of tracing paper.

In general, he makes his drawings as mirror images of the final drawing that will appear in the album. The separate images are brought to the final page by tracing them on a illuminated table. Finally the page is traced with Chinese ink.

The last stage is coloring the page. This is done on separate sheets, not on the original drawings. Cosey: ‘To put colors on my original drawing would require so much care, such tidiness! It would make me horribly nervous!’ 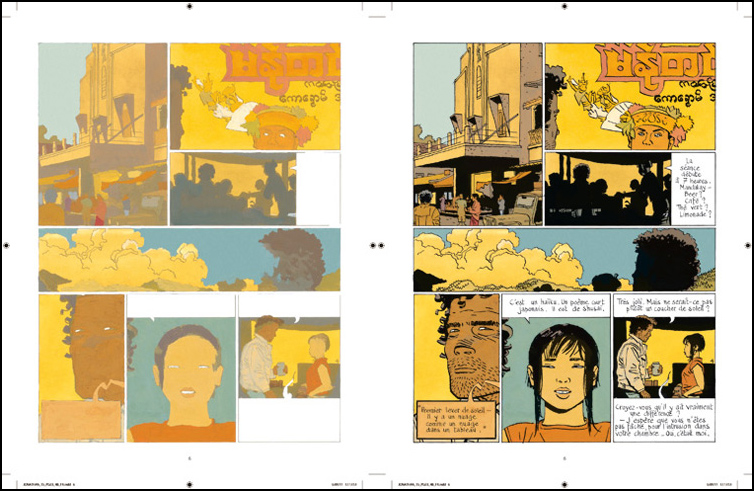 Page 6 of Atsuko: on the left the ‘bleu de coloriage’, on the right the complete page. 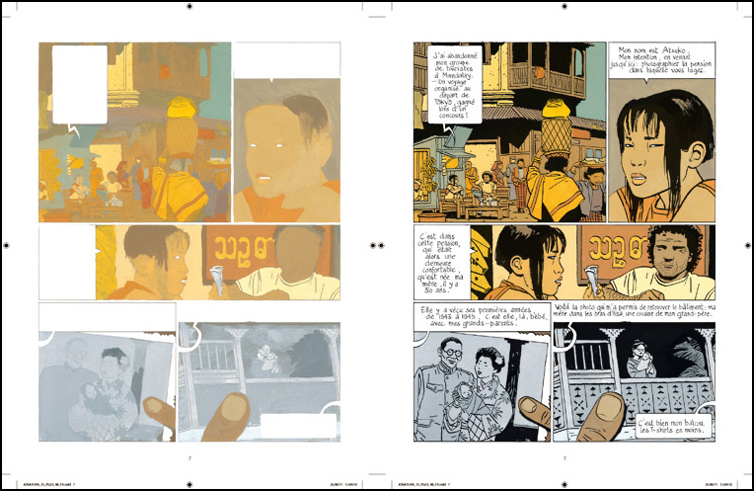 Page 7 of Atsuko: on the left the ‘bleu de coloriage’, on the right the complete page.

‘And moreover, one of the characteristics of comics is this black trace, which is pure and is very readable. […] I love this typical comics look.’