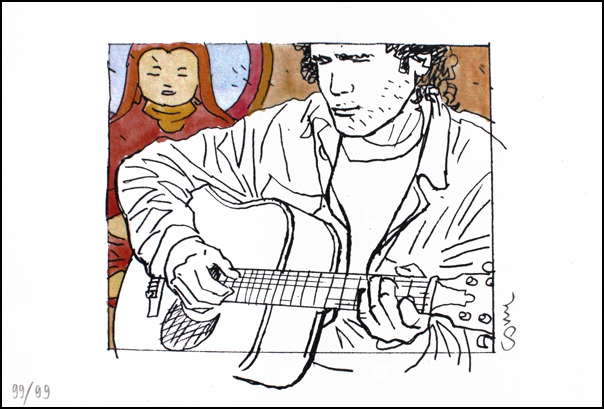 Ex libris for the bookstores ‘Decitre’

Poster and catalogue cover for the exposition ‘Pic & Bulle’ in the ‘Musée de l’Ancien Évêché’ in Grenoble (France).

Lithographie, made during the Festival BD in Solliès
22 ex. were printed

4 february 2017: contribution to the last issue of L’Hebdo

Interview in september 2017 issue of ‘Regard Bouddhiste’

Invitation for exposition and meeting with Cosey at Librairie Gallimard in Paris.

Card published by Le Lombard. On the inside of the card you see an origami instruction.

Drawing for the website of Paris Match (january 2018) – it is unknown if the image was printed in the actual magazine.

Illustration for Easter Mosaïque in Ouchy (Switzerland), the illustration was made with coloured eggs.

Below: the work sheet for the people who made the mosaïque.

Thanks to Bernard Matthey Doret

Postcard with images from ‘Le Voyage en Italie’; on the occasion of the exposition ‘Roman Graphique’ at the Fondation Jan Michalski in Montricher (3 november 2018 – 6 january 2019).

Thanks to Bernard Matthey Doret

Ticket/poster/etc for music festival in Les Diablérets
(The image was re-used for the 50th festival.

Poster (A2) to celebrate issue number 50 of the magazine Transhelvetica

Book cover illustration for a collective album with comics about Lausanne. The book is offered to all Lausanne citizens on their 18th birthday.

Catalogue celebrating comic bookstore Raspoutine’s 30th birthday – the book contains a few drawings by Cosey. Some editions go with ex-librises, among them one by Cosey.

Several illustrations for watch company Zenith, to celebrate the 50th birthday of their automatic chronograph ‘El Primero’. Look here for the full story.

A4 print of an image taken from ‘À la rechereche de Peter Pan’, published by Le Lombard, presumably for clients and relations