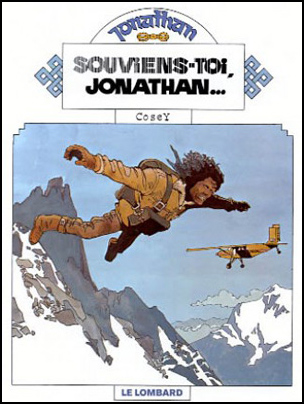 In the comics world of the middle 70s, adventure series were the rule. However, Cosey proposed his Jonathan album not as the first part of a long series, but as a ‘one shot’. This was not the only deviation from traditional comics making. Cosey: ‘I looked at it as ‘one’ Jonathan, it was my debut and after that I would create a series. It is true that at the time one thought ‘series’, but for me, Jonathan was one. And later, working on this first album, I realised that I hadn’t told everything and that I liked to continue.’

The first Jonathan story was published in the journal Tintin. ‘I have proposed Jonathan everywhere, except at Lombard because Derib was published there. I was his apprentice, and I was conscious to make only ‘under-Derib’ at that time. So, I didn’t think it was interesting for them and for me to work for the same publisher.’ ‘A few months later, I got a letter from Henri Desclez, who had been chief editor for the comics supplement of ‘Le Soir’, in which I had published some comics on scenarios of Duchâteau. Desclez had become chief editor for the journal Tintin and asked me if I had any projects to propose. So I left for Brussels…’

A new kind of comic

Another unusual aspect of Jonathan was the total absence of adventure, action and a classic hero. With Jonathan, Cosey broke every classic scheme. ‘There are two desires that are at the basis of my quest for something different. Honestly, I think I am not talented enough to reproduce what other have already done. For instance, if I would make a western, I don’t have the talent of Giraud. And moreover, it wouldn’t interest me. So, I very strongly have felt the idea (which isn’t mine) that in a work of creation, you have to be yourself. In that, you will be the best. Don’t be afraid to be original!’ ‘I had a certain ambition, a will not to be a number 2 or 53. How to make something and be at your best? By being yourself, by being true to yourself.’

Nowadays, Tibet doesn’t seem a strange location for a comic, or a film. But in 1975, very little was known about Tibet, and the Chinese kept the frontier closed for foreign tourists. Cosey: ‘There was very little documentation at the time: Alexandra David Neel, five or six photographers (and so: as many books), Heinrich Harrer, Tintin in Tibet, Lobsang Rampa, and that is all. But anyhow: it attracted me!’ Why was he attracted to Tibet in the first place? ‘I love mountains, I love snow, I am interested in philosophical research, in Asia. And if you sum up these elements one after the other, you easily come to Tibet.’

The reaction of readers

Although Jonathan was a complete innovation at the time, the readers reacted enthusiastically. ‘The reactions were good. There was an audience close to Jonathan, who found themselves in Jonathan, rather than in Ric Hochet (Rik Ringers). This has nothing to do with the talents of Tibet and Duchâteau, nor with their work, but the universe of Jonathan pleased an audience of that time.’