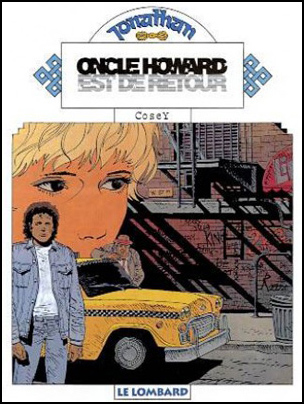 With the tenth and eleventh album, Cosey for the first time locates the story in the USA. In later albums, in the ‘Aire Libre’ collection, he will come back to the USA. The USA offers him places that are ‘a world on their own’, a certain exoticism he adores to draw. Cosey: ‘I have a fascination for everything that forms a world on its own, for everything that has ‘character’. Certain New York districts are extremely banal, but other are real ‘worlds’, and that is what is interesting to draw. But I go further still, I would say that I have the tendency to ‘cheat’ a little, by selecting only what I qualify as ‘universal’. Everything in New York that is without visual meaning, I leave out.’

The two American Jonathan albums were coloured by Paûle Ceppi, the wife of the Swiss comics author Daniel Ceppi. Cosey: ‘Poor Paûle, she has suffered! One does not lure her into this trap again!’ After Fraymond, Paûle was Cosey’s second colourist. His own colour work after these albums shows their influences. While the first Jonathans and also ‘A la recherche de Peter Pan’ are marked by somewhat gloomy, dark browns and blues, from ‘Le voyage en Italie’ onwards, the colours of Cosey become clearer and brighter.