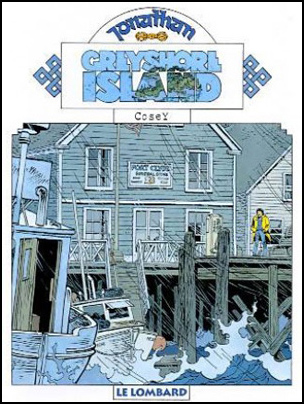 The second part of Jonathan’s American adventure, takes us from Disneyland (California) to New England (Port Clyde, Maine). As major influences and examples, Cosey names Maurice Tillieux, Hugo Pratt and… Walt Disney. In this album, Jonathan visits Disneyland, California. Cosey: ‘I find extraordinary the character of Walt Disney, who started to draw in his uncle’s garage. And the fact that he wasn’t particularly talented did not hinder him in building a universe.’ The Disneyland Cosey shows is not meant as criticising the commercial character Disney’s work has taken. ‘I have been there when there was only a Disneyland in California, and I liked it. Of course, I saw the ‘kitsch’ edge, the commercial exploitation, but after all, why not? It makes you dream.’