In 1976, Cosey and his (future) wife travel to Asia for the first time: Ladakh, an Indian protectorate of Tibetan ethnic and culture. The result can be seen in this third Jonathan album. From this album onwards, Cosey strives for a higher realism in his comics. Even scenes describing ordinary daily life get their place in his albums…

‘I love that in a comic. That is just what I love about Gil Jourdan [a comic by Maurice Tillieux], where daily life is very present. 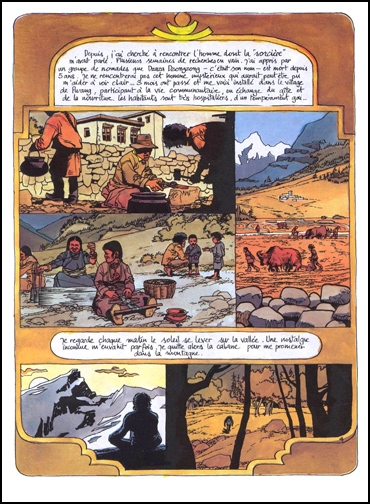 Impressed and inspired by his first journey to Tibet (Ladakh), the environment in which Jonathan lives becomes more realistic. From more or less ‘abstract’ mountains in the first two albums, we now see more detailed landscapes, vegetation and farms, as well as more details in clothing, jewelry and simple kitchen utensils.

The journey also has its consequences for Cosey’s stories: ‘The fact that I had visited a Tibetan region for the first time has given me the liberty to make things that I wouldn’t have dared if I hadn’t been there. One discovers that everything is possible.’