The German edition with a different cover

In this album, Cosey introduces his former ‘comics teacher’ Derib as the charlatan Casimir. The young Cosey wanted to become a comics author, and Derib was the only professional comics author in Switzerland. In 1969, Cosey went to derib for advice, and Derib put Cosey to work as an apprentice. Cosey worked as a colorist for comics like ‘Go West!’ and ‘Yakari’. Some of the drawings that Cosey made in this time (copies of comic characters Gil Jourdan [Guus Slim] or Gaston [Guust] can be seen in ‘Echo’. 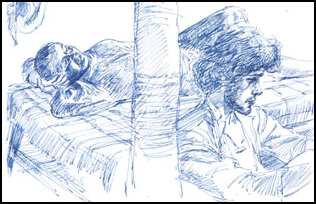 A sketch of Cosey, by Derib. The lady on the bed is unknown.

A lifelong friendship results from their cooperation and shared interest. Strange enough, Cosey draws Derib as charlatan and some kind of predecessor of the New Age movement.

Maybe this is a revenge on Derib, who drew Cosey as some bandit in his Buddy Longway album ‘Drie mensen gingen voorbij’.

A drawing by Cosey in Derib’s book ‘Aventure d’une BD’ suggests that the two men also went on tours to explore the snowy mountains of their country.

Balloon text: ‘Derib! Come back we’re lost!’ Text at bottom of the drawing: ‘To Derib, a lover of crazy winter tours. And love to the baron too, of course’ (the book was made in cooperation with Georges Pernin, a baron).