The second Jonathan Intégrale collects the Jonathan stories 4, 5 and 6. It is preceded by a dossier – an interview with Cosey and an essay by Claude Levenson. Like the first Intégrale, the dossiers shows many unknown sketches and studies. Personally, I think it is a pity that sketches (the character studies) from the years of the albums and sketches from a much later period (e.g. the sketch for a later drawing for National Geographic – later retaken again for the cover of Echo) are shown without dates. I even think that in a dossier, only sketches or studies that were made in preparation for the albums should be shown – an editorial choice. The photographs are beautiful and invite to compare the albums with the documents – but here too, I think, some of the photographs are from a later date. Overall, the album is a jewel, just as the first of the Intégrales. The colour corrections have been applied with care and modesty; the character of the original drawings and colours have been maintained while the colours are more vivid and fresh than in the original editions (again, I compared with my old dutch editions). 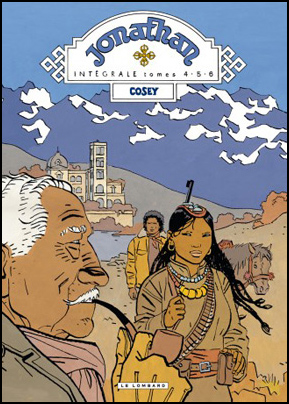 I think the new cover is a far better composition. The ‘collage’ like first cover is redrawn as what could have been an actual scene from the album. All items from the first cover are retaken in the new cover (the old colonel Westmacott, Shangarila, Jonathan, the villa), except for the salesman David Jones. He seems to be replaced… by a horse. Isn’t it strange? (To add to this: for most characters of the albums, the dossier shows character studies, but not for this poor David Jones…)