This story was originally published in two volumes. Several editions have been published through the years. An overview:

Covers of the first edition (in the collection ‘Histoires & Légendes’)

Covers of later editions (in the collection ‘Signé) 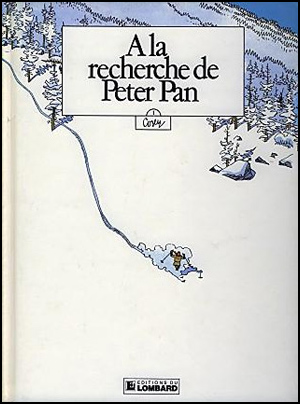 Cover of the special edition published by Raspoutine (2015): large format with black and white drawings

Cover of the black and white edition published by Niffle (2019)

After nine Jonathan albums, Cosey makes his first one shot. Originally planned for 60 pages, the final story has 116 pages.

Cosey started working on the album after Jonathan 8. The album ‘Kate’ (Jonathan 7) had just won the ‘Alfred’ of Best Album in Angoulême, and Cosey’s publisher Lombard asked him to interrupt his work on ‘A la recherche de Peter Pan’ and to continue on a new Jonathan, which would become ‘Neal et Sylvester’. Cosey: ‘Peter Pan was considered by the publisher as a present he gave me, saying ‘Make your Peter Pan, that is what you want to do, do as you wish, but we warn you: it will sell less than Jonathan, because it is no series’. And it was the opposite: Peter Pan has sold better than Jonathan!’

‘A la recherche de Peter Pan’ is the only story (so far) of Cosey that is set in his own country, Switzerland. It is also the only story that plays in the past, in the 1930s.

Cosey: ‘[…] the Swiss universe of today is visually nearly interesting. […] It is therefore, without a doubt, that ‘A la recherche de Peter Pan’ plays at the beginning of the century. It is my only comic that is not contemporary, for this reason. Although there is a lack of exoticism, there is at least the distance of time.’

The character Evolena has borrowed her physics from the actress Maria Schneider, known for her role in Bertolucci’s movie ‘Last Tango in Paris’.

An explicit reference to the movie ‘Last tango in Paris’ is made at the end of part two of ‘A la recherche de Peter Pan’.

In 2021, the inspiration for the appereance of Melvin Woodworth was unveiled.

17 September 2021, Nicholas (Nick) George Minden died. A friend of him wrote me to tell that Nick Minden was Cosey’s english teacher in Lausanne – and he was the model for the other main character in ‘Peter Pan’- Melvin Woodworth.

Nick Minden was born in noble rumanian family that had to flee the country when the iron curtain closed (remember: Melvin stemmed for a Serbian family). After his studies in England, Nick ended up in Lausanne, Switzerland. His love for rugby brought him and his friend Uli together; they became friends for life.

Melvin Woodworth compared to the Nick Minden of 1985, that is: just after Cosey finished ‘À la recherche de Peter Pan’.

A censured scene in the journal Tintin: the images at the left are taken from the journal, the two right images appear in the album. The same ‘censure’ has been made for the English/American edition of ‘A la recherche de Peter Pan’ (with the title ‘Lost in the Alps’; a black and white edition).

The journal Tintin published a page that is missing in the album. Cosey numbered the page itself as ’96Bis’, which indicates that the page was made specifically for the journal.

Two covers of the journal Tintin: