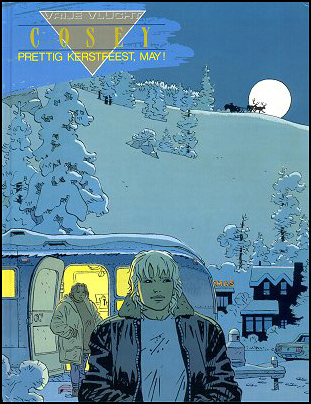 The Christmas story of ‘Joyeux Noël, May!’ put Cosey before a problem concerning America’s fauna: there are no reindeers on the Nort American continent to draw the sledge of Santa Claus.

‘I was busy looking at all the horned animals of North America for the one that looked most like a reindeer. En then there was that other idea about a scene with wolfs, but I didn’t want to run into the cliché wolf = danger, followed by some heroic action. So, wolfs, reindeers: a zoo and my two problems were solved at once! And it worked!’

‘The character of the Indian was inspired by the movie ‘One flew over the cuckoo’s nest’. It could be that, maybe, one day I will make a story about the Indians of today.’