This story was originally published in two volumes. Through the years it has had several editions. An overview: 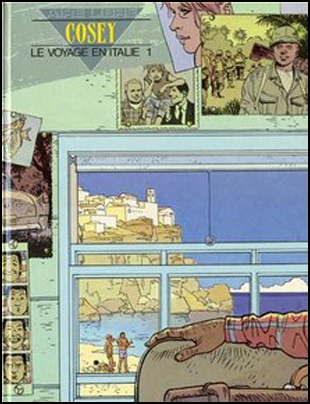 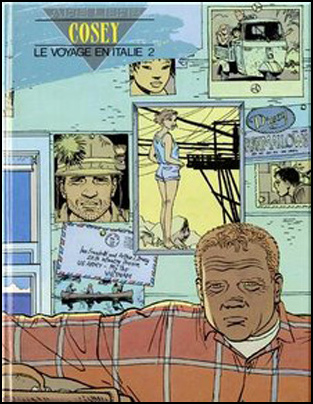 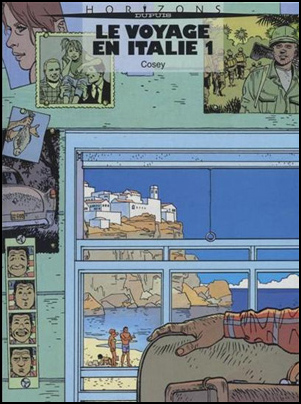 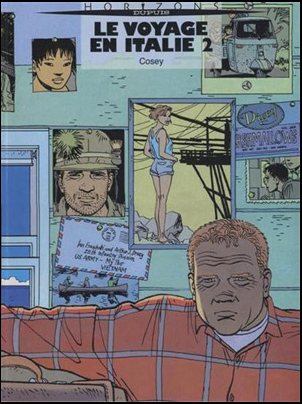 A later edition in the collection ‘Horizons’

After ten years of work for Lombard, Cosey went to Dupuis to publish his ‘Voyage en Italie’. Cosey: ‘In June 1986 I started ‘Le voyage en Italie’ without knowing who would be its publisher. I have presented the story to Casterman, Glénat, Lombard and Dupuis.’ Cosey was specifically interested in publication at Casterman. But after long talking, the final answer of Casterman was negative. ‘At the time I heard that Jean van Hamme had entered Dupuis. I have rapidly come to an agreement with Van Hamme. I trusted this publisher-author, and it pleased me very well to participate at the birth of a new collection.’

So, ‘Le voyage en Italie’ was the first album of the collection ‘Aire Libre’…

After the two Jonathan albums ‘Oncle Howard est de retour’ and ‘Greyshore Island’, Cosey returns to the USA with ‘Le voyage en Italie’. Cosey: ‘A part of my family is American, they had emigrated at the time of my great-grandfather, and we have kept in touch with them. I have always asked what my life would have been if I had been a part of that family branch. And between the different answers, there would have been Vietnam.’

But of course, a large part of the story is set in Italy. The Italy region visited is Puglia (Southwest Italy), especially the region around Alberobello, known for his ‘trulli-houses’.

The end of ‘La voyage en Italie’ is a very painful one. Cosey: ‘Nothing is definitive… Yes: suicide is surely definitive… But, in the case of Shirley, who leaves with her suitcases in the rain, you don’t know…Maybe in about twenty years, who knows… I do not have a sequel in mind… but story characters can continue to live, even if there is no album to report and these continued lives.

‘But I am very satisfied to have made this album, because I have succeeded in expressing this fear of missed opportunities in life. Whether is fear is reasonable or not, doesn’t matter: it exists and I have expressed it…”

After having used very lyric titles for Jonathan, Cosey comes up with a very neutral title for this story. Cosey: ‘In ‘Le voyage en Italie’, I wanted to leave this poetical aspect of my usual titles, without falling into the classic comics titles like ‘The Mystery of the Ugly Monster’… I found this title that I liked just because it had no mystery or lyric.’