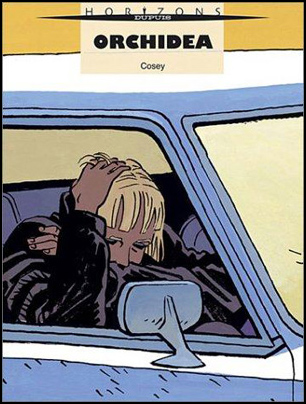 Cover of an edition in the collection ‘Horizons’.

The story of Orchidea is Cosey’s second album in the ‘Aire Libre’ collection. The setting of the story is the American Southwest.

The story of ‘Orchidea’ came to Cosey rather spontaneously, when he was working hard to make a story about Vietnam (the later Saigon – Hanoi). He had assembled all kinds of documentation, but the story wouldn’t come.

‘I wasn’t capable to come out of it, and one day I went out to make some purchases and on my way from home to the shop, which took fifteen minutes, I told myself the story of ‘Orchidea’. Just like that, I don’t know why it happened, I don’t know why I thought of this old eccentric who disappeared from his old people’s home, from his asylum. I told it myself and I very much amused myself. Well, I have made ‘Orchidea’. Still, it took me some weeks to develop it and to change things that didn’t go well.’

‘For example, I have hesitated a long time about a detail concerning the car: convertible or not? A convertible would be nicer, but it shouldn’t look like a ‘holiday’. I regret my choice a little… [the car is not a convertible]’