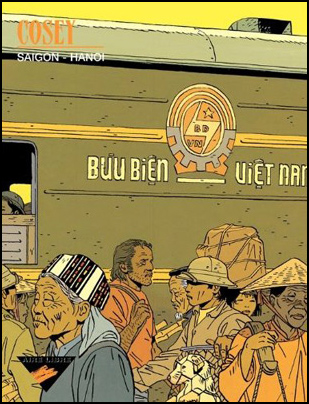 With ‘Saigon – Hanoi’ Cosey at last made the Vietnam story he wanted to write for several years. He wanted to tell a Vietnam story, like you could see in a movie, but that was not available in comics.

He went to Vietnam in December 1988 – January 1989. ‘I reported many images, sensations, meetings, especially a meeting with American veterans who made a pilgrimage. I found that it was very strong, very rich. So strong even that I have spent six months trying to write a scenario.’ But Cosey didn’t manage to deal with all the material he had collected. Then came the story of ‘Orchidea’, which took him a year to make. In this year, the Vietnam story had the time to mature in his head.

And the story that grew in Cosey’s head would be an innovation in storytelling…. The scenario of ‘Saigon – Hanoi’ was nothing like any story ever told in comics. Also Dupuis, the publisher, had its doubts. Cosey: ‘When I proposed it to Philippe Vandooren [editor at Dupuis], he said: ‘Okay because it is you. […] But if it were anyone else whose work I didn’t know well, it would be no! This is not a scenario, it is not publishable, your thing!’ And it won the prize for the best scenario [at the festival of Angoulême]!’

‘I was really very satisfied, because it was really a rupture. But it is the only way I have found to tell about Vietnam. It is such a painful subject…’

‘By accident, I have met the same group of veterans twice […] and it was something so impressive because none of them were particularly sensible or sensitive people, but it were fellows who realised how much they were traumatised, shattered by the events they had lived through.’