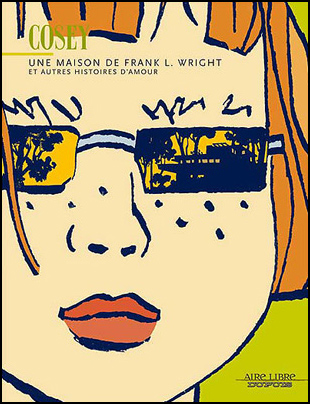 Writing short stories requires other narrative techniques than Cosey is used to (and his readers of course). No slow developments of characters and story: these short stories have more ‘speed’ and some of them have a dream-like atmosphere.

The first story of the book is called ‘Une petite tulipe rose’. It is a story of two elderly people who meet each other many years after having been in love. Cosey*: ‘It is more or less a dream: when I was in love at the age of twenty, I said passionately to myself that I wanted still to be in love at eighty’.

In ‘Une maison de Frank L. Wright’ Cosey’s story almost seems to be a pretext to show one of the famous houses of Frank Lloyd Wright. The house represents to Cosey the magical America of the 1950s en 1960s, when he was a little boy and his uncle brought pictures and American products like marshmallows from the USA. An atmosphere Cosey has never found on his own travels in the USA. ‘I have refound it recently, reading a biography of T.C. Boyle, and I discovered that he had lived in a house of Frank Lloyd Wright. […] This is a way for a comics author to overcome his frustrations!’

‘Only love can break a heart’ is the most ‘traditional Cosey’ story. An adolescent, longing for the sister of a friend, due to circumstances spends a day with the girls’ grandmother. The young boy helps the old lady to live through sad memories.

The last story is Cosey’s love declaration to the comics of his youth. In ‘Sur l’île’, an adult man thinks back how he, as a boy, and a girl made their way in stolen cars to a fantastic library full of comic books. Cosey: ‘This is the most autobiographic story of this album on an anecdotal level: like the boy and girl that I have drawn, I went to the parking lot of La Blécherette during the football matches, to look for a car that was unlocked, and I pushed it up to the hill to descend it. But I was alone, there was no nice girl with me.’ The scene in the library has a dreamlike character: ‘I have always wanted to say ‘thank you’ to all those comics authors who have nourished me in a compelling way, and who have triggered my love for this wonderful job.’

Cosey’s drawing of the characters in this album differs from the realistic drawing of Cosey’s earlier albums. The drawings are simpler, more ‘comic-like’. Cosey: ‘The cover has been the object of many discussions, but it was the direction I wanted to go: to come to a great simplicity, that I also like to achieve one day in my pages.’

Is it Bob or not? 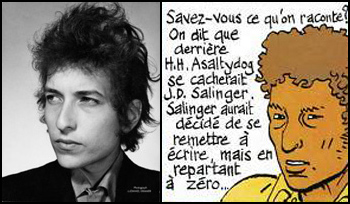 The male character of the story ‘Une maison de Frank Lloyd Wright’ made me think of a young Bob Dylan… Do you agree?

*all quotes are taken from the Swiss newspaper ‘Le temps’. With thanks to Cédric Marzer.