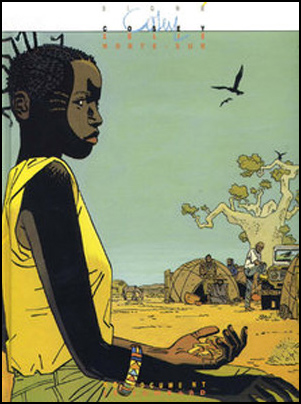 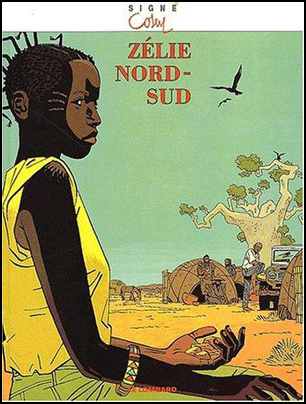 Cover editions in the collection ‘Signé’. For a later edition, the image was mirrored. 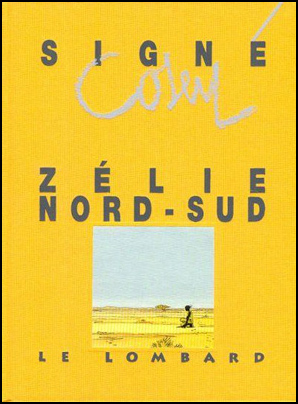 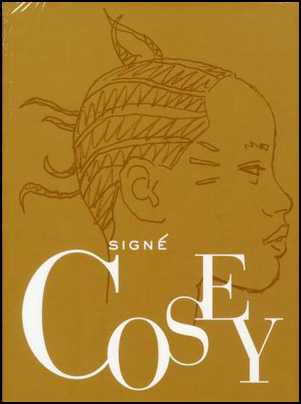 Back cover of a box grouping the Zélie album and ‘À la recherche de Peter Pan’.

This album was an assignment of the ‘Direction de l’Aide au Développement et à la Coopération’, a unit of the Swiss Ministry of Foreign Affairs. The DDA is an organisation working in Third World countries. Cosey: ‘They have contacted several comics authors for this project, whose goal is to show the cooperation work they do. I have been chosen and I have passed three weeks in Burkina Faso where the story is set.’

With the album, an educational package was published, with a ‘newspaper’. I only know this german edition:

Although the album was ‘ordered’, Cosey was completely free to elaborate his own scenario. ‘The greatest difficult with Zélie was the subject of the cooperation, because these cooperation workers have an image close to that of a boy-scout, and I have not succeeded in finding a solution for that problem.’

‘Instead of a cooperation worker, I have chosen a black girl who lives in Switzerland and goes back to her country.’

The story of Zélie is the only story of Cosey (so far) that is set in Africa. Cosey: ‘I wouldn’t have set my feet there if I wasn’t attracted in the first place. But I have discovered things in Burkina Faso and Mali, and I would be ready to go back to Africa with pleasure.’

For this album, Cosey has worked with a colorist, Valott. The album is dominated by orange and red colors, the colors of Central Africa. 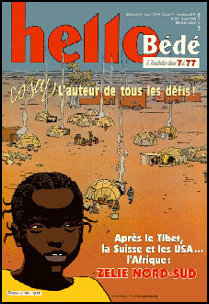 Cover of the magazine ‘Hello Bédé’