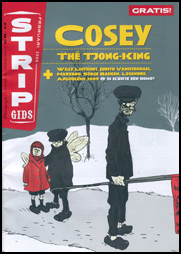 Sometimes, I wished I lived in Switzerland… many of Cosey’s works (apart from his comics, of course) are published in local/regional magazines, advertisings or posters. A few weeks ago, however, I found out that the flemish magazine ‘Stripgids’ had published an interview with Cosey – so here we have this rare dutch language publication! The magazine was published in February, but I only managed to get a copy two weeks ago (sometimes, Belgium seems so far…).

The interview is written by Toon Horsten, and it is a nice interview indeed, with very nice photos by Bart van der Moeren. For Cosey-watchers not so much news – mainly because Cosey is so very consistent in his interviews over the past years.

But in the interview Cosey teaches us, ‘close Cosey-readers’ a nice little lesson in modesty… Take your album of ‘ELLE’ and look at the title page: ‘What is this?’ Cosey asks the interviewer. The interviewer: ‘I don’t know’.

Cosey: ‘Damn! Ai. This is bizarre. I am afraid I have to face the truth: sometimes I overestimate my readers. (turns to the last page of the album). I will give you the answer. Look: here – in the fifth message Jonathan writes to Cosey – he talks about a little handiwork paper lantern. This is what is drawn on the title page. For your defence, I can tell you that the reader is not used to seeking answers to a certain question on a title page. Therefore, I like to put an image from Jonathan’s youth on the title page. It is outside the story, but still, it refers to the story. I hoped the reader would make the connection between the title page and the story, after reading the album and leafing through it another time’.

'The World of Cosey' is created and maintained by Roger Klaassen