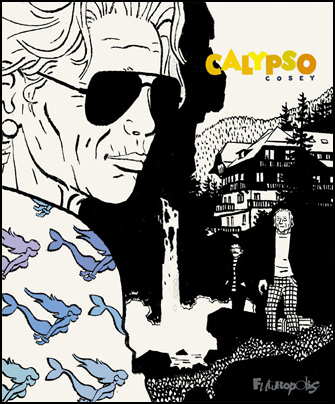 In June 2016, I learned that Cosey’s new album would be a black-and-white album, a novelty in a career of more than 40 years of colourful albums. For an artist who loves colour, making an album in black-and-white is a major step. But it is also a next step in Cosey’s continuing search for simplicity and purity.

In 1988, Cosey says he loves black-and-white in the works of Pratt, Tardi, Muñoz and Caniff. He continues: ‘In my case, only the night scenes go well in black-and-white. I believe I still have a lot to do with colours.’ (1) Ten years later, Cosey tells us that he is attracted to doing an album in black-and-white, but: ‘Until now, I haven’t had the opportunity. It should not be ‘gratuit’: it should be the story that justifies it.’ (2)

That story has come with Calypso. The original idea was to set the story in the USA, but Cosey wanted to draw a different environment – Switzerland. Because he didn’t want to make an album that looked too much like ‘À la recherche de Peter Pan’, he decided this was an opportunity to make it black-and-white. 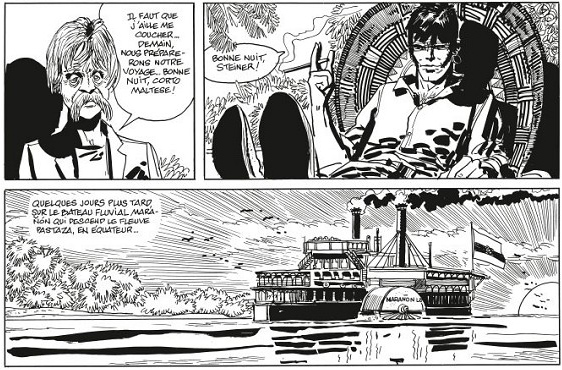 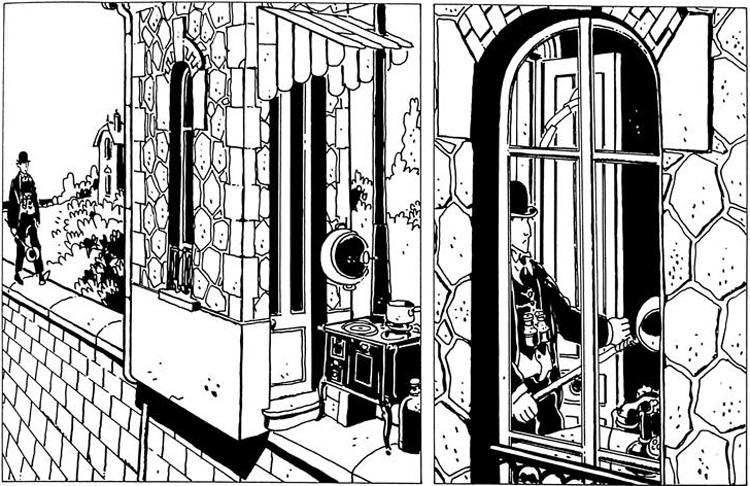 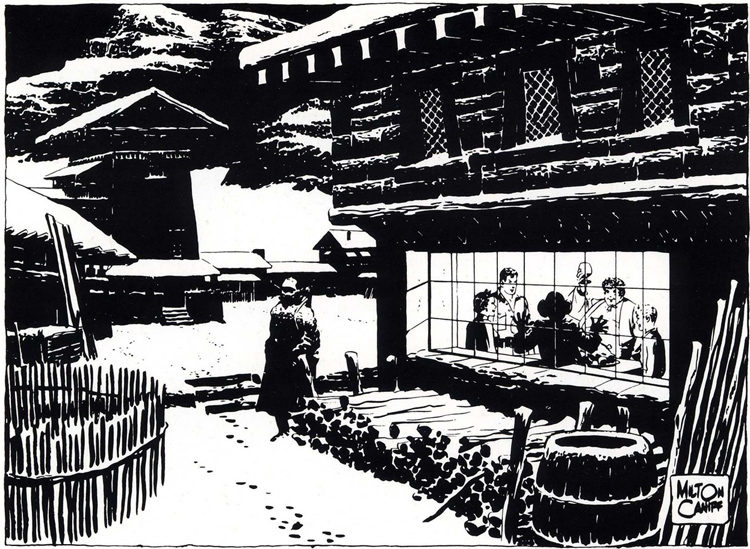 In a recent interview Cosey mentions the woodcut prints of Félix Vallotton (1865-1925) as another source of inspiration. (3) 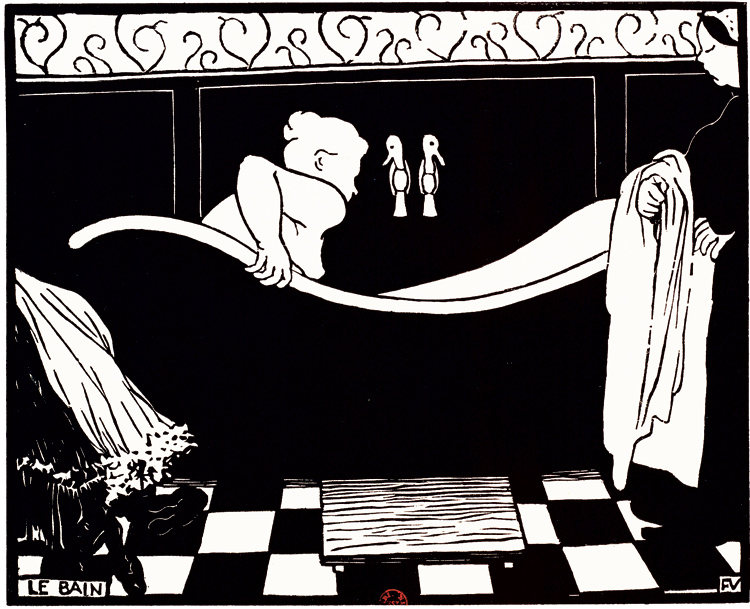 Over the years, Cosey has strived for a greater simplicity of his drawings. Comparing his albums of the late 1970s with his albums of the 2010s, you see an enormous difference. The drawings are simpler, with stronger lines, hatchings have disappeared. Cosey in 2008 : ‘My objective today is to achieve a suggestive drawing, and not an imitation of reality.’ (4)

The ‘suggestion’ he wants to achieve has often been linked to pure whiteness: snow. Cosey: ‘From a drawing point of view, snow landscapes are very interesting, because in general the horizontal plains disappear and you only see vertical surfaces. It is like an interpretation of a landscape. What fascinates me, is that you can ‘not-draw’ snow. Many artist try to draw it, but I think it is funny not to draw it, as you are working on white paper. I simply draw the rock, the fir tree, the character and the blue shadow which gives an indication of the snow. I love playing with these phenomena. It is the reader who sees snow where there is nothing else than paper.’ (4)

In 2013, Cosey gives an extension of this theory of illusions, referring to Scott MacCloud’s study ‘Understanding comics: the invisible art’. ‘Comics function by fragments and incompleteness. [I have always been fascinated by] what Scott McCloud likens to ideograms. A super simplified drawing that represents a real thing, the opposite of a trompe-l’oeuil. Looking at the face of Tintin, you don’t see a drawing. You see Tintin, even someone who doesn’t know him. Take a smiley, a rough thing, you don’t see a drawing or a line, you see a smile.[…] The representation happens inside of ourselves.’ (5) 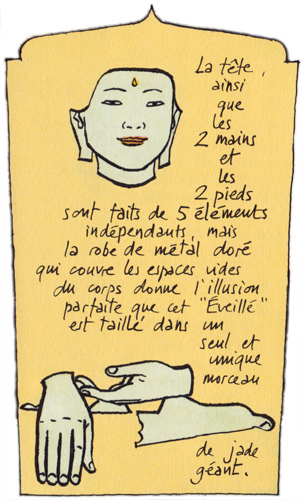 The idea of a mental image constructed from fragments is quite literally expressed in ‘ELLE ou dix-mille lucioles’.

In Calypso, Cosey takes this play with optical illusions and representation one step further: not only snow (white) but also black. He believes that readers have the power to construct an entire image from only a few indications: ‘I use [ black and white] without any concession, without grays or hatching. It is binary.’ (6).

‘[In Calypso, I do the same thing as with the snow] with blacks. […] I have fun to use black to the maximum, I make large black surfaces, where details are melted together. In these black areas, the reader will draw all the fir trees. I will not tire myself, the reader has to do his job too.’ (7). 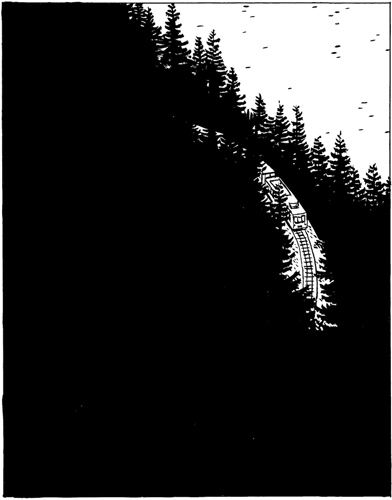 Calypso: black to the max. How many trees do you see?

Cosey explains in more detail: ‘In 99% of comics, black is for shadows, white for light. […] I have tried to use black and white in another way, considering them as two colours. I decide if an element is black or white. On the other side, with black and white, as much as possible I suggest rather then describe. So, if a character wears a black jacket, and if he appears against a black background, I don’t leave an edge of white to distinguish the shoulder from the background […].’ (8)

Cosey jokes this is a consequence of his laziness, but he is an artist who takes his reader seriously.

The original idea for Calypso came from François Mattille. Mattille has often acted as ‘script doctor’ for Cosey, when he got stuck with scenario problems.

In 1988, he told Sapristi: ‘[François Mattille] is a childhood friend, with whom I share this passion for comics. We have written scenario projects together, but he has taken another direction [Mattille opened a bookstore called ‘Le lieu du crime’].’

Cosey continues: ‘He has often helped me when I felt completely blocked by a scenario problem without solution. He really is my crisis staff officer, to whom I tell my scenario and say ‘Well this is my scenario, I am at a dead end, I can only find bad solutions’.’

When the interviewer asks: ‘But has he [Mattille] never come to you saying ‘Bernard, I have a script for you, I have written a story?’, Cosey answers: ‘So far, never. He has often told me: I have a scenario for you – he tells me the first ten pages, it is super and then… voilà. I ask him: Okay, and what happens next?’ (9)

As I understood from Cosey, this sounds familiar for the creation process of Calypso: Mattille has delivered an initial idea. The essential difference this time, almost 30 years later: Cosey has taken the decision to develop the story based on Mattille’s starting point and bring it to an end.