Exciting news came to us in july 2015: french publisher Glénat had the authorisation to publish new adventures of Mickey, made by well known comic artists like Trondheim, Keramides, Loisel… and Cosey. Together with ‘Mickey’s craziest adventures’ by Keramides and Trondheim, Cosey’s album was the first album to be published in the new series ‘Disney by Glénat’.

Glénat has already been publishing classic Disney albums in french. When he proposed a new collection of Mickey albums, created by the best of french (and belgian ans… swiss) authors, Disney liked the idea and gave Glénat a go. Authors had to adhere to a set of rules (like the absence of sex, violence and weapons), but enjoyed a great freedom to create adventures that are a bit out of the usual Disney-line.

An interesting and promising initiative!

In my article, I want to go into the Disney references. I know a lot more can be said of the album: read all the things Mickey has to say about scenario-writing and we come close to a credo of Cosey himself – But that I leave up to you!

Cosey has never made a secret of his affection for the works of Walt Disney. In 1978, he even went to Disney Studios in Burbank to look for an opportunity to work for Disney. Cosey could get a job, but he realised he would loose the freedom to create what he wanted. His Jonathan albums started to sell reasonably well, so he decided to continue his own series and declined the job offer.

In the 11th Jonathan album, ‘Greyshore Island’, Mickey and Goofy make their appearance in a scene playing in Disneyland (LA). A Mickey key ring is a major clue to solve the mystery in that album.

Mickey and Goofy in Greyshore Island

In a long interview in dBd (december 2008), the subjects are ranged according to the alphabet. Cosey’s answer at ‘Y’: ‘I am happy my pseudonym finishes with the same letter as Walt Disney’. In other interviews, Cosey tells about his love for the United States, especially the magical USA of the first half of the 20th century: the positive, worriless and colourful image of America. In his albums, we see books of several amercian authors (T.C. Boyle, Updike among others), we see an ode to Frank Lloyd Wright’s architecture, we see a Bob Dylan poster and a charcter with the looks of Dylan… Cosey’s stories are set in Asia or in the USA, except for one album…

The Walt Disney rendition of ‘Main Street’ played its role in feeding that ideal, romantic image of americanness. As he tells in the interview I had in september 2015, a childhood dream has come true with this Mickey album. This ‘autobiography’, drawn in 2005, has got a new meaning with the release of the Mickey album:

The title of the album points to the main subject of the story: a quest for the girl (Minnie) who sang a mysterious melody. The use of music to introduce female characters is a recurring theme in Cosey’s albums, as I have shown in my article about ‘Celle qui fut’. I just couldn’t help thinking about ‘À la recherche de Peter Pan’: Mickey approaching Minnie’s hut in the woods compared to Woodworth going up to the Grand Hotel, both Mickey an he guided (or seduced) by the piano playing, both to meet their loved one.

The title might also refer to the Disney film series ‘Silly Symphonies’, made between 1929 and 1939. Mickey didn’t appear in these films, but Donald Duck made its first appearance in a cartoon called ‘The wise little hen’.

Disney stories are created and drawn by several studios around the world. Each story has its own code, to identify the makers (the studio, that is, not the artists). On the first page of the album (page 5, in fact), you can find the code just under the first image. It reads ‘F DBG 01’, which means ‘France – Disney by Glénat – album no. 1’. A code that in Disney databases will testify forever that Cosey was first artist in this collection.

For his album, Cosey goes back to the Mickey cartoons of the years 30-40. Mickey was created in 1928 as a film character and made his debut in ‘Plane Crazy’. In this very first film, Minnie is already his girlfriend. Cosey decided to tell how Mickey met Minnie, setting the story in 1927, just before the first film appearance of Mickey. 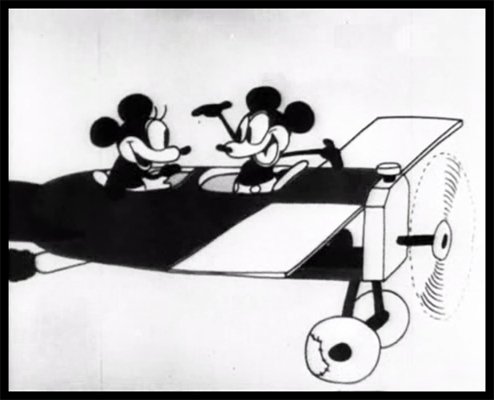 From 1930 onwards, Floyd Gottfredson made a newspaper comic with Mickey. Here you see one of the earliest strips. Mickey is carrying a gun, something that was not allowed for the new adventures. It is easy to see that the Mickey by Cosey is graphically very close to this early Mickey strip character. In later newspaper cartoons, a gray colour is made by screen patterns (tiny dots). In two-colour journals and newspapers, these patterns were used to add colour to drawings: a principle Cosey used to colour the film scenes in his album.

In several interviews (notably with Frédéric Bosser in dBd 101, march 2016) Cosey tells that he put together a sort of ‘graphic bible’ and that he drew the characters of the album as a sort of drawing by observation, a kind of life drawing. He explains that he had some difficulties in drawing Mickey’s face seen frontally, and Goofy’s face seen in profile. Also, Mickey’s eyes at the beginning were just black dots with a glimmer, a challenge for Cosey to express emotions.

Cosey kept close to his usual colour scheme (expanding it into pinks and reds) and even though he is cautious with the layout of the pages, on some of them we recognise the typical Cosey-esque layout of panels and the changes between wider panels and close-ups. The album cover is a real beauty, one of the best covers ever made by Cosey.

To get a ‘go’ for his Mickey album, Cosey had to make a test page, page zero, that was shown on BD FIL in 2015. In the album, the film part (the first image of the test page) has been expanded, a film set scene has been added and Mickey behind his typewriter can be found on the third page (page number 7 in the album). In my opinion, the test page is a very powerful opening page because of its density and the way Mickey is introduced (voice – hand – seen from a distance – close up). A play with Disney classics…

‘Une mystérieuse mélodie’ is full of references to classic Disney cartoons. I am not a Disney expert, but I have tried to collect some of them. I think they add to the fun of reading the album! 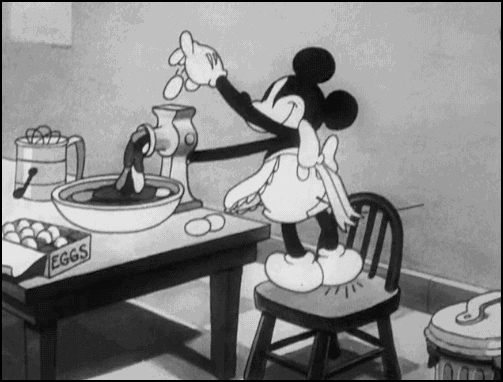 On page 10, the train may be the train (it is a little simplified in Cosey’s drawing) known from the Donald Duck cartoon ‘Out of scale’, from 1951. Cosey himself corrected me on this point. He told me the train was taken from ‘Dumbo’ (1941), the circus train called ‘Casey Junior’ (Casey – Cosey – a little joke). But comparison of the two Disney trains to Cosey’s drawing om page 10, I think the train of the Donald cartoon just looks more like it – judge yourself. 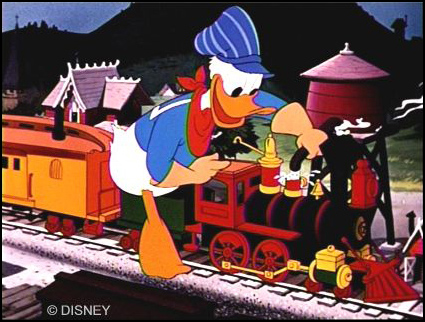 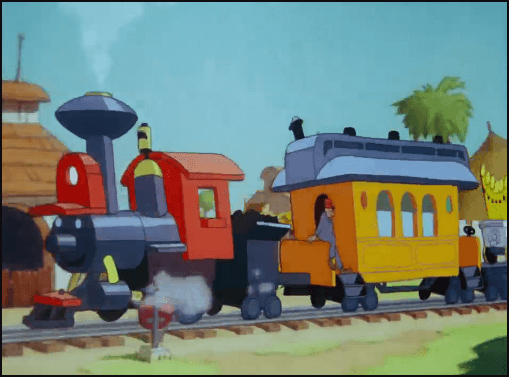 On the same page 10, we see an angry duck sticking his head out of a boat window. In 1934, Donald Duck makes his first appearance in a cartoon called ‘The wise little hen’. Donald lives then… on a boat. 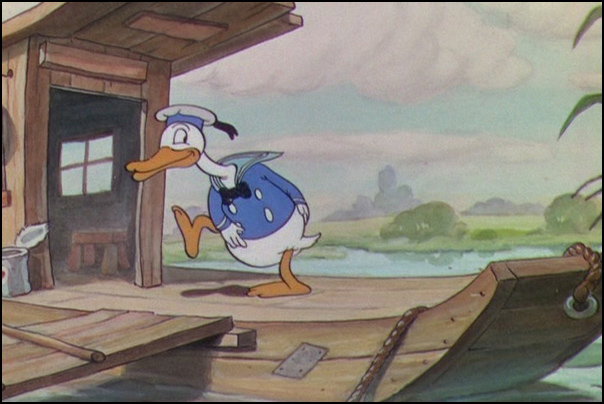 Another boat can be found on page 16. This is the boat called ‘Little Toot’, appearing in the 1948 film ‘Melody Time’ (thanks to Aleksandar Joksimović for finding this one). 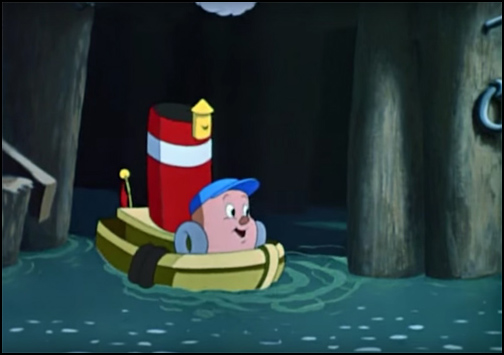 Mickey’s dream on pages 22-23 are scenes coming directly from the film ‘Flowers and trees’, made in 1932. Strange enough, the song that points to Minnie (the mysterious melody) isn’t sung in this film – at least not in the version(s) I saw. 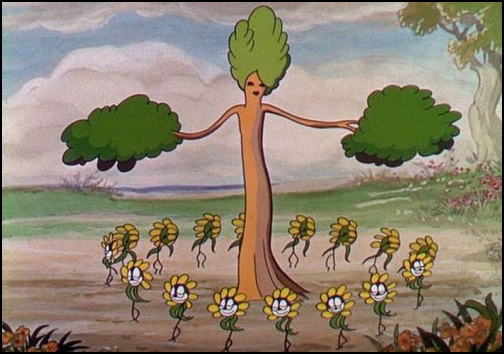 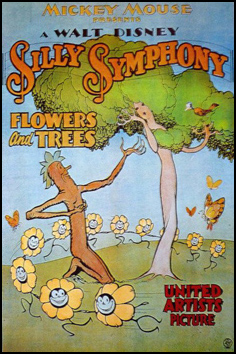 On page 55, Mickey is preparing to meet Minnie: washing, shaving, brushing his teeth… Did I write ‘shaving’? Look at this picture, probably from the 1930s. 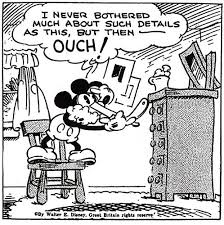 On page 57, Mickey sees Minnie playing the piano. There are several films with Minnie (and Mickey) playing piano. I have found this piece of film in ‘The Gorilla Mystery’, 1930. We can easily imagine Mickey being seduced by this piano virtuosa!

Maybe you have noticed more references to Disney cartoons. Please send them to me: mailto: roger@rogerklaassen.nl

I have some starting points, of which I think could be links to Disney classics: