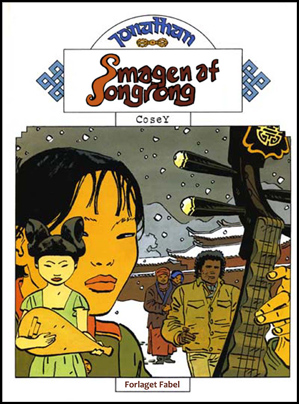 The history of Danish translations of the Jonathan albums is a bit confusing to a non-danish expert like me. From 1978 till 1980, the first five Jonathan albums were published in Denmark by Williams Forlag, with a cover design quite distinct from the well-known white and blue frames of the original editions. Then, Interpresse took over and published Jonathan albums 7 till 11 between 1983 and 1987. The first two of their albums followed the cover design of Williams, the other four had the original design (however, for number 8 they took over the different cover drawing from the german edition). The last danish Jonathan was number 12, published in 1997 by Carlsen Comics. I don’t know if these editions are still available – probably you have to look for them on the secondhand market.

Now for the good news for our danish friends: Forlaget Fabel will publish the latest Jonathan albums, starting with number 13 ‘Smagen af Songrong’ at the beginning of 2019. We wish them luck and hope sales figures will encourage them to publish all remaining Jonathans, and – why not? – republish the earlier Jonathans as well.

Thanks to Thomas Geertz